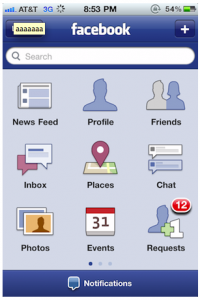 OK – first of all I haven’t checked-in anywhere yet!

But I plan on it.

I have been using Foursquare for a while now and Donny has been using Gowalla.  Competiting location-based services (LBS), we decided we could divide and conquer and compare the two major LBS giants (there are plenty of other sites, not to mention Yelp).  There are others out there as well, but these are the ones we wanted to play with.

Now Facebook Places is announced yesterday.  Rather than writing my own review (since I really haven’t experimented enough with it), here’s a good one from TechCrunch.

A couple of surprises:

I’ve got alot of ideas on how these LBS tools can be used by businesses and even churches to reward loyalty and encouraging social word-of-mouth (aka, “word-of-phone”).  This article from the NYTimes also highlights how Places will be used to compete with Google for advertising space (although I really don’t pay attention much to Facebook advertising now).  I’ll be curious if Facebook Places offers something special that taps into their overwhelming dominance in the social networking world.  Alot of research still to do.  But know that we’re looking into it for you!